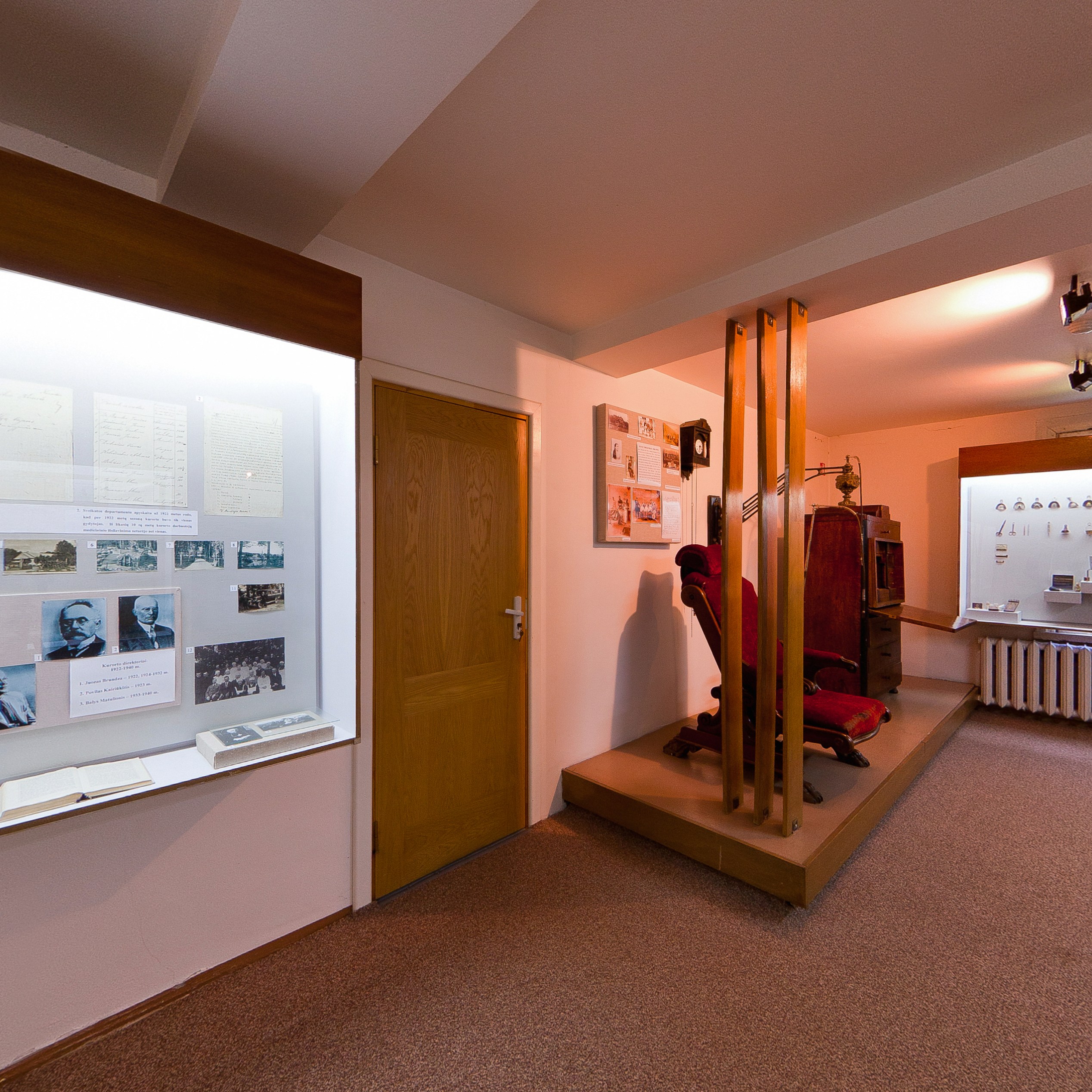 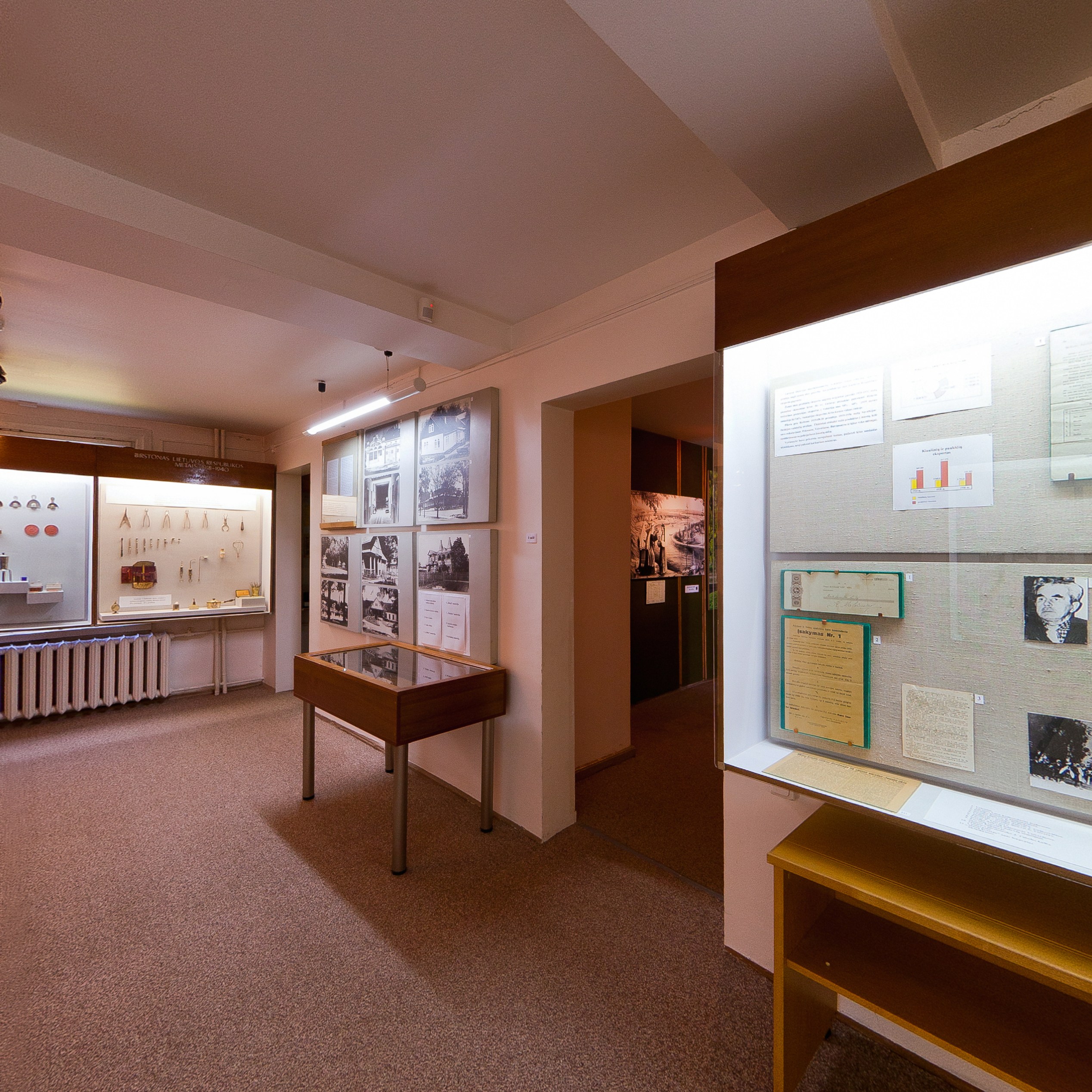 All panoramas of this object: Birštonas museum (2) Birstonas Museum is housed in a wooden building that was built in 1932-1933 by a forester Antanas Katele. It was originally built as a holiday house that was distinguished by its decorative turrets and ornaments on the front facade. Until 1941 the house served as accommodation for educational personnel who stayed in Birstonas for treatment and was later nationalised in 1948. After that it was incorporated into the “Tulpe” spa as a holiday villa called “Ramune”. Since 1967 the villa has been the seat of Birstonas museum. Petras Kazlauskas was a geography teacher who founded and launched the museum. He was also a leader of local Birstonas ethnographers.

The building has been enlisted in the Lithuanian Cultural Heritage Inventory as an architectural monument.

The Birstonas museum exhibition consists of a number of sections. The first section called „Birstonas in the ancient times” displays archaeological artefacts and their photos. The first record of Birstonas in a written text was in 1382 when Birstonas was mentioned as one of defence castles against the Teutonic knights in Panemune. After 1410 Battle of Grunwald (also called Battle of Zalgiris“) the castle was turned into a manor hunting house and summer residence for Lithuanian Grand Dukes. In the display section you can see exhibits typical for the period of Teutonic knight conflicts, hypothetical reconstruction of Birstonas castle and royal residence, maps, plans, and population censuses. Local peasants and craftsmen provided necessary maintenance, support and services to the royal residence. The exhibits include 18th-20th century farming tools, household stuff, blacksmith and carpenter works collected in the area surrounding Birstonas.

The second section of the exhibition presents the history of Birstonas as a resort, its development until the I World War. The portraits of Adolf Abicht, Emanuel Lachnicki and some other scientists, who did research on Birstonas mineral water springs, are exhibited together with their scientific works, press articles, even some of the equipment from treatment facilities. Another section of the exhibition entitled „Inter-War Birstonas“ tells the story of Birstonas revival after the I World War and displays some equipment from a dental surgery of a dentist Ignas Sablauskas, who ran his surgery in a holiday house on the right bank of the Nemunas river. There are also numerous photos of the resort of that time as well as some documents and other exhibits of that period. Much attention is paid to doctor Balys Matulionis, the head of the resort, and to Jurgis Venckunas, a pioneer doctor of therapeutic mud baths in Lithuania and the founder of the first therapeutic mud treatment facility.

On the second floor of the museum visitors encounter an exhibition of Nikodem Silvanavicius’ duplicate works, who lived in Birstonas from 1880. There are also documents from the meeting of a group of architects who were in fact Polish soldiers interned after the beginning of the II World War. The group was the initiative and brainchild of doctor Balys Matulionis and together they prepared development plans for Birstonas. Some of these documents are on display.
Further exhibits depict the revival of Birstonas resort after the II World War. Citizens in exile. Photos, documents and tables of modern Birstonas resort. Part of the exposition is devoted to scientists who did research on Birstonas healing qualities; sportspeople who have popularised the resort, and Birstonas Jazz Festival. Last but not least, there is a memorial exhibition that commemorates Professor Jonas Kazlauskas, a brilliant linguist and expert in Baltic languages.
Each year the two museum halls are the venue for numerous work exhibitions of painters, folk artists and photographers. Besides that, you can meet them in person and learn something new.